Psychiatrist and Cannabis Advocate Lester Grinspoon Passes Away At 92

Last week, the cannabis community lost an advocate and champion for cannabis legalization and scientific research. Dr. Lester Grinspoon, NORML board member and professor at Harvard Medical School, passed away at the age of 92.

In 1971, Dr. Grinspoon published his book Marihuana Reconsidered, which explores the effects of marijuana and its effects on society. The book was first published by Harvard University Press and is considered one of the most comprehensive and influential elucidations for the need to legalize and end the prohibition of marijuana and institute a legal marijuana market.

“I am convinced that there are genuine and valid levels of perception available with cannabis (and probably with other drugs) which are, through the defects of our society and our educational system, un-available to us without such drugs,” Dr. Grinspoon wrote.

After observing the role marijuana plays in society and the effects on its people, Dr. Grinspoon speculated in the 1970s that marijuana legalization would increasingly become a trend in the United States.

“Whatever the cultural conditions that have made it possible, there is no doubt that the discussion about marihuana has become much more sensible,” Dr. Grinspoon wrote in 1977.”If the trend continues, it is likely that within a decade marihuana will be sold in the United States as a legal intoxicant.”

For Dr. Grinspoon, his advocacy for cannabis legalization and medical implementation was rooted majorly in personal experience. He observed the medical benefits of cannabis in his son, Danny, as he battled cancer and underwent chemotherapy at 10 years old.

After a drug prescribed to Danny caused him to experience uncontrollable vomiting, Betsy Grinspoon, Lester’s wife, suggested that Danny begin using marijuana to calm his stomach. Despite Lester’s initial objections, Betsy went ahead and let Danny use it.

“My surprise gave way to relief when I saw how relaxed Danny was,” Grinspoon later wrote. “He did not protest when he was given the [anticancer] medicine, and we were all delighted when no nausea or vomiting later followed.” 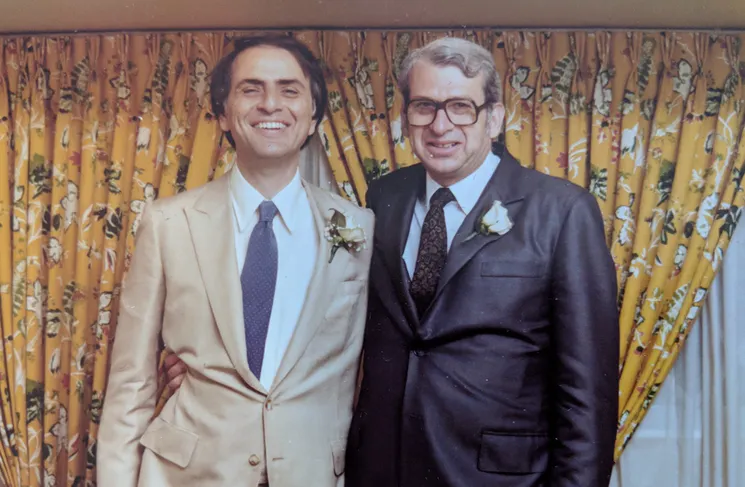 Just a couple of scientists who changed the world: Astronomer Carl Sagan, left, and psychiatrist Dr. Lester Grinspoon, right, came from different academic fields but bonded over a shared fascination with the science of cannabis. (Photo courtesy of Dr. Peter Grinspoon)

The friendship between Dr. Grinspoon and American astronomer, astrophysicist and author Carl Sagan was also a large contributing factor to his research and advocacy.

“Carl and I used to review each other's manuscripts before they were published. When he read Marihuana Reconsidered, he said, ‘That's a wonderful book, but you made one big mistake. You said in the last chapter that marijuana prohibition will end within ten years. But it's going to be gone in two years. It just can't survive any longer than that!’, Dr. Grinspoon said in an interview with VICE.